While galaxies that lack dark matter have been predicted in the 𝛬CDM cosmological model, they had not been observed until 2018, when Van Dokkum et al. 2018 claimed that the ultra-diffuse galaxy NGC10252-DF2 has a ratio of dark matter to baryonic matter of effectively zero (Van Dokkum et al. 2018). A similar object, NGC 1052-DF4, was subsequently discovered the following year (Van Dokkum et al. 2019). Although the validity of these results is still being discussed, the existence of such objects should not come as a surprise if the standard model is correct, since, in a 𝛬CDM cosmology, the dual dwarf galaxy theorem must be true; that is, both dark matter dominated dwarf galaxies formed primordially and dark matter free dwarf galaxies formed via galaxy interactions must simultaneously exist (Kroupa 2012).

The standard, spatially-flat, 𝛬CDM model (Peebles 1984) is consistent with current observational constraints such as the cosmic microwave background (CMB) anisotropies, baryon acoustic oscillation distances, supernova Type Ia apparent magnitudes, and Hubble parameters (Yu et al. 2019). Thus, we assume that the standard 𝛬CDM model is accurate, implying that the dual dwarf galaxy theorem must be true and that dark matter deficient galaxies must exist. We utilize the IllustrisTNG100-1 simulation to probe certain properties of these dark matter deficient galaxies with the ultimate goal of providing insight into how to better observationally detect these galaxies and gaining a clearer understanding of how they form, as observationally discovering more of these galaxies can provide significant insight to our understanding of dark matter.

The IllustrisTNG100-1 simulation contains 4,371,211 initial SUBFIND subhalos at redshift z=0, which are gravitationally bound structures that contain stars, gas, and/or dark matter. Initially, we select subhalos with a nonzero stellar mass and check the 'Parent' property of each subhalo, which indicates which subhalo is the most massive in a certain friends-of-friends (FoF) group. However, there are instances where the 'Parent' property is unable to resolve whether or not the subhalo is a substructure in a more massive subhalo, so additional criteria are applied. Thus, for each subhalo, we look at the separation distance d between the subhalo under consideration and its host subhalo. If d is greater than two times the host's stellar half mass radius, then we say that the subhalo is a galaxy. We also ignore any subhalos with less than 20 star particles and a stellar mass less than 107 solar masses, since any subhalos with values smaller than these are more prone to errors associated with resolution. After applying these criteria, we find a total of 79,068 galaxies. The mass distribution of these galaxies is shown in Figure 1. 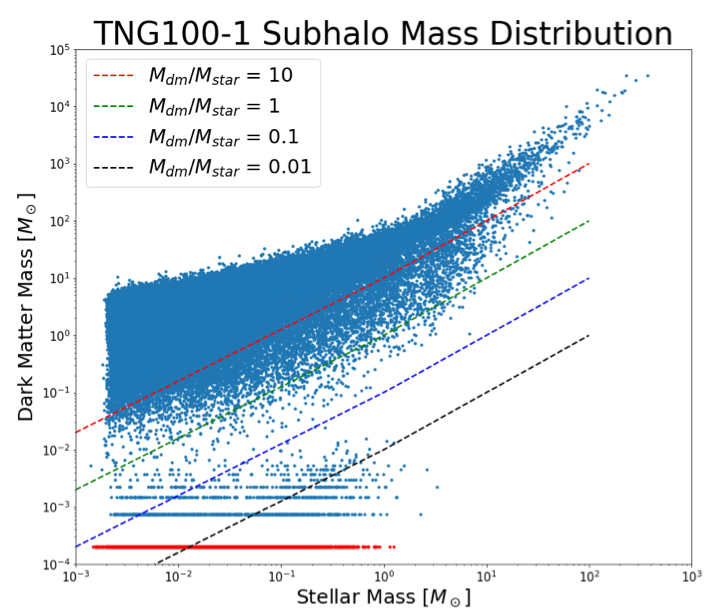 Figure 1. Each point represents a galaxy, and the dark matter mass and stellar mass are the values from 'SubhaloMassType'. Each galaxy located below the green dashed line is a dark matter deficient galaxy candidate. Additionally, the red points represent galaxies with a ratio of dark matter to stellar mass equal to zero, moved here artificially in order to visualize them.

One interesting result that we are still trying to interpret is the increased number of dark matter deficient galaxies found in IllustrisTNG100-1 when compared to Illustris-1. The results are summarized in Figure 2. 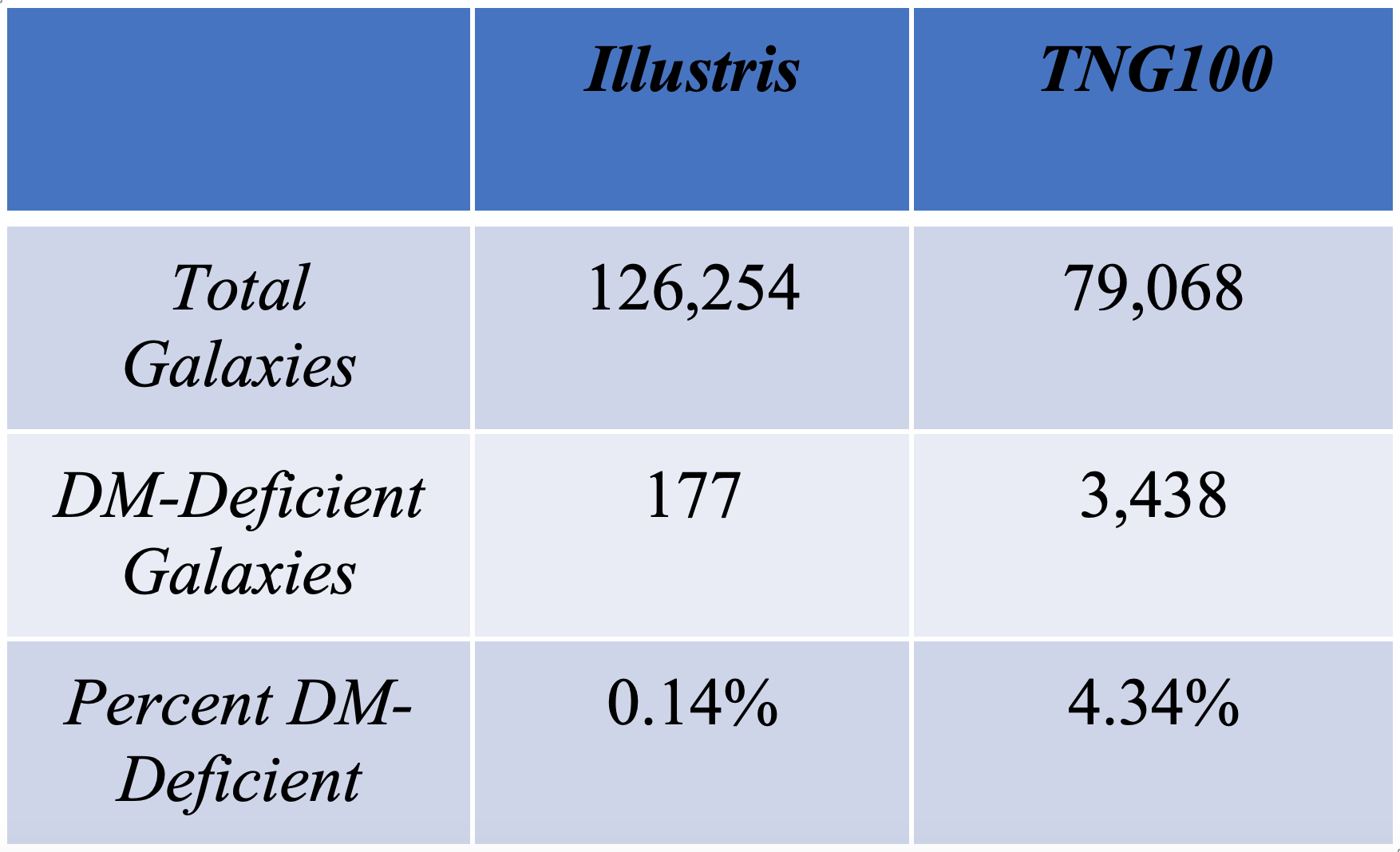 Figure 2. Illustris results are from Yu et al. 2019. Although the IllustrisTNG100-1 simulation has less overall galaxies, the probability of finding a dark matter deficient galaxy in the TNG simulation increases by over four percent.

Figure 3. The blue histogram shows the number of dark matter dominated galaxies per bin. The TDGCs are galaxies that contain no dark matter, while the DM-poor DGs have a dark matter to stellar mass ratio greater than zero but less than one. 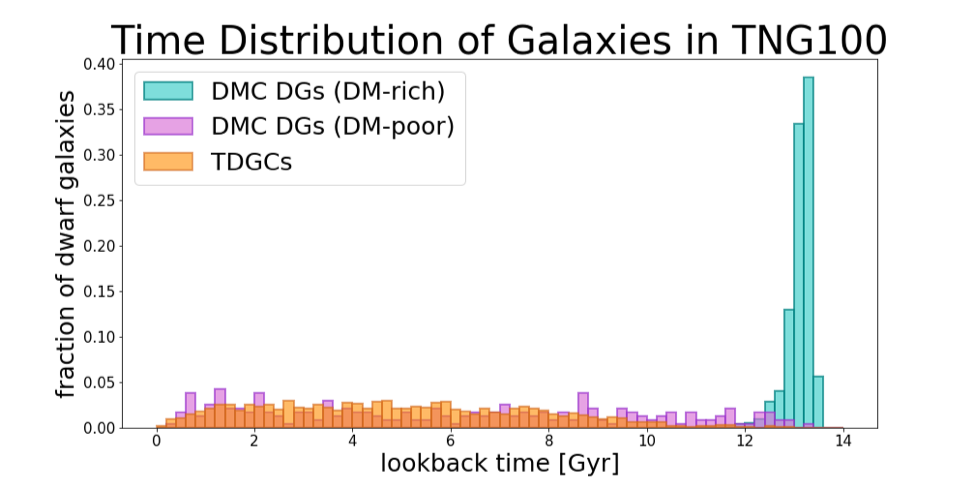 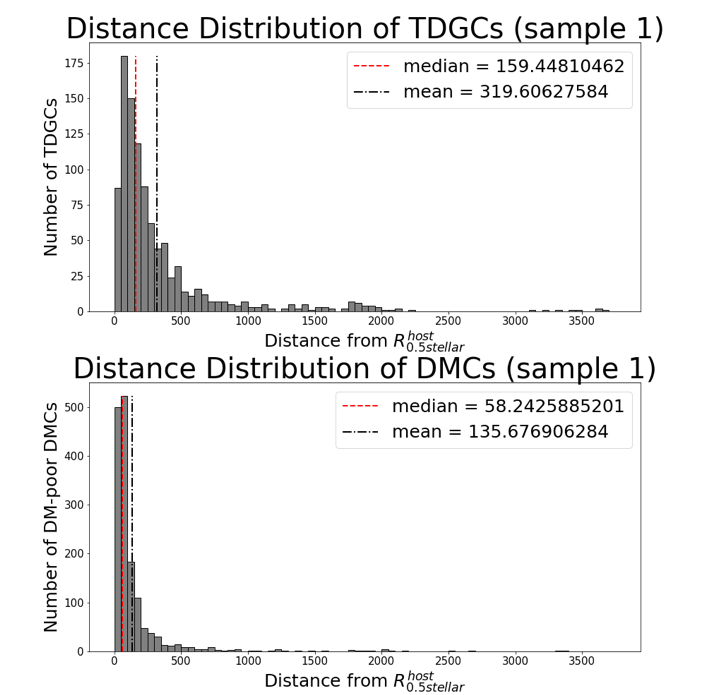 I will be continuing this research throughout the year, with the results to be submitted for publication. As of now, the main goal is to determine if there are any significant differences between the two types of galaxies, as well as determine if different selection criteria significantly changes the results.

I would like to thank my mentor, Dr. Bharat Ratra and grad students Hai Yu and Harish Murali for their help and guidance on this project. I would also like to thank the TNG Collaboration for providing my data, the National Science Foundation for funding, Kansas State University, and Dr. Bret Flanders, Dr. Loren Greenman, and Kim Coy for coordinating this REU program.