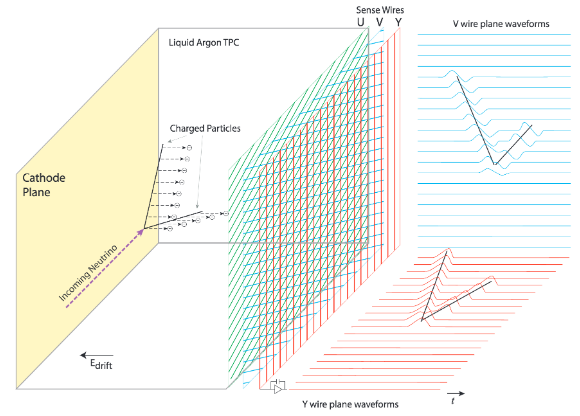 Figure 1: A schematic showing how position data is collected in LArTPCs. A neutrino interacts with a nucleus, causing some particles to splinter off and move through the liquid argon. These incident particles knock electrons off argon atoms, after which the electrons drift over to the planes of wires as a result of an applied electric field. [1]

This project aims to use the multiple Coulomb scattering (MCS) algorithm, developed by the MicroBooNE collaboration, for particle identification. Multiple Coulomb scattering describes the process by which elementary particles scatter off of atomic nuclei. Across a sufficiently large number of scatters, this process follows a Gaussian distribution, and the spread of these collective scatters is dependent on a particle's mass and momentum.

Figure 2: A cartoon demonstrating how multiple Coulomb scattering affects different particles. Protons need to move at a higher momentum than muons to make a track of the same length, so they are scattered less by Coulombic forces.

The MCS algorithm finds a track's momentum by calculating the scattering angles for some track and figuring out which momentum would have most likely produced these scatters. It then returns this momentum and a statistic quantifying the likelihood of the track having this momentum. To complete this process, the program needs an expected particle mass. Running this program twice over one track, once predicting a muon mass and once predicting a proton mass, and comparing the likelihoods from the runs can help confirm which kind of particle is more likely to have made the track. The variable naming convention in Figure 3 is used, implying that the scenario associated with lowest negative log-likelihood is accepted as true.

Figure 3: A variable naming convention, where L is the likelihood for some event to occur. Here, maximizing the likelihood of some scenario is equivalent to minimizing its negative log-likelihood.

This algorithm was tested for two simulations, one of which was a sample of 1000 muons and the other of which was a sample of 1000 protons. The momentum in each sample was set so the track length was on average 80 cm (for muons, p = 0.3 GeV/c; for protons, p = 1.0 GeV/c). In each sample, the MCS algorithm applied two fits (one assuming a proton mass, one assuming a muon mass) to each track with length greater than 70 cm. The lowest negative log-likelihood in the muon fit for one track was subtracted from the lowest negative log-likelihood of the proton fit, and the difference for each track was recorded and plotted on a histogram. 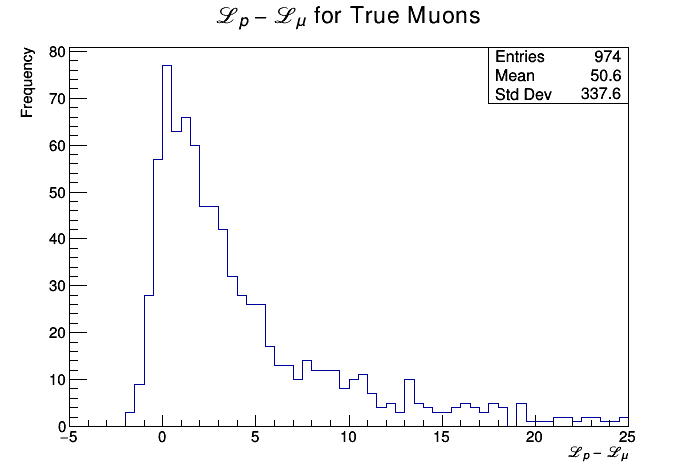 Figure 4: A histogram plotting the difference in the log-likelihoods of proton and muon predictions for a sample of muon tracks with track length &gt; 70 cm. The fact that the peak of the graph lies above 0 and that there is a long tail off to the right indicates that the majority of the tracks in the sample were deemed more likely to be muons than protons. 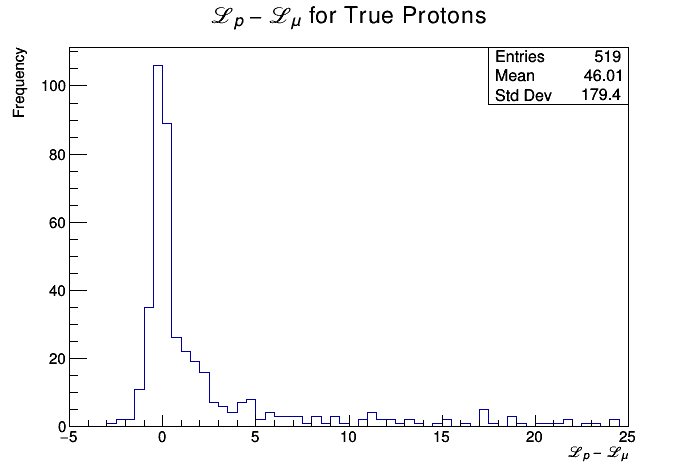 Figure 5: A histogram plotting the difference in the log-likelihoods of proton and muon predictions for a sample of proton tracks with track length &gt; 70 cm. The peak of the graph lies around 0, and, there is a long tail off to the right. This means that the program is identifying protons more often than not as muons. The number of acceptable tracks is also much lower in the proton sample than the muon sample.

As evidenced in figure 5, the protons appear to have similar scattering patterns to muons. This kind of behavior arises because protons can interact with argon nuclei in ways that do not involve Coulombic forces. Namely, protons can interact via the strong interaction, which will create inelastic collisions or hard scatters. The algorithm shows promise as a method of identifying particles. However, these interactions need to be accounted for before the algorithm can be used for particle identification. Since muons do not strongly interact, figuring out when strong interactions are being observed can help narrow down the list of possible particles.