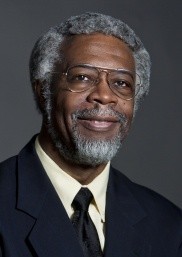 Gates will present "What Abdus Salam Taught Me About Jazz" at 4:15 p.m. Tuesday, Sept. 11, in 105 Umberger Hall. This lecture is open to the public and will be at a nontechnical level.

In the early 1980s, Gates spent several summers at the International Centre for Theoretical Physics headed by physics Nobel Prize winner Abdus Salam. Salam once made a curious comment about jazz, which 30 years later resulted in an essay by Gates being cited by the Supreme Court of the United States on the issue of diversity.

In August, Gates was elected to the presidential line of the American Physical Society, a nonprofit representing more than 55,000 physicists in higher education, national laboratories and industry in the U.S. and across the world. He will serve as vice president in 2019, president-elect in 2020 and president in 2021.

Gates received two bachelor's degrees and a doctorate from the Massachusetts Institute of Technology. His doctoral thesis was the first at MIT to deal with supersymmetry.

In 2017 Gates retired from the University of Maryland where he was a regents professor, John S. Toll professor of physics, director of the String and Particle Theory Center, and an affiliate professor of mathematics.

Gates served on the U.S. President's Council of Advisors on Science and Technology from 2009-2016 and the National Commission on Forensic Science from 2013-2016. He is a past president of the National Society of Black Physicists and a fellow of the American Physical Society, the American Association for the Advancement of Science, National Society of Black Physicists and the U.K.'s Institute of Physics.

An elected member of the American Academy of Arts and Sciences and the American Philosophical Society, Gates was elected to the National Academy of Sciences in 2013, becoming the first African-American theoretical physicist so recognized in the academy's 150-year history. President Obama awarded Gates the 2011 National Medal of Science, the highest award given to scientists in the U.S., at a White House ceremony in 2013. The Harvard Foundation named him Scientist of the Year in 2014.

In 2015, Gates became a member of the board of directors of the Achieve Inc. and the board of councilors for the Boy Scout of America's STEM National Council.

Gates has recorded a DVD series titled "Superstring Theory: The DNA of Reality" for The Teaching Company. This series of 24 half-hour lectures make the complexities of unification theory comprehensible to non-physicists.

Gates has appeared in several "NOVA" programs on PBS, including "The Big Bang Machine," "The Great Math Mystery," "The Mystery of Matter," "Inside Einstein's Mind," "Thru The Wormhole: Do We Live In The Matrix?" and "Secrets of Einstein's Brain." He has also appeared in the BBC's "Horizon" series, "Inside CERN." Gates recently appeared in a six-part series titled "James Cameron's Story of Science Fiction" that included Cameron's discussions with Steven Spielberg, George Lucas and others in the film industry.

Light refreshments will be served before the lecture at 3:45 p.m. in the hallway outside of 105 Umberger Hall.

This lecture series is supported by an endowment from Dr. James R. Neff in honor of his parents, Everett and Florine Neff. A K-State alumnus, Neff was an internationally recognized orthopedic surgeon and professor at the University of Nebraska Medical Center in Omaha.