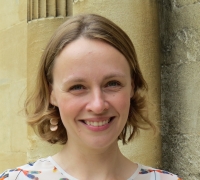 An astrophysicist who has received honors for her work on the Big Bang model will deliver the 2018 Chester Peterson Jr. Public Lecture in Physics at Kansas State University.

In her nontechnical talk "Our Window on the Universe" at 4:15 p.m. Tuesday, October 30, in 105 Umberger Hall, Jo Dunkley, professor of physics and astrophysical sciences at Princeton University, will discuss the human fascination with the night sky that gives us a window on space beyond our home on Earth. She will describe how — by studying distant light coming from the earliest moments in time — we have come to better understand our universe and some of the big questions about space and time that we are now trying to answer. She will discuss the quest to understand the Big Bang, to find out more about the ingredients of the universe — including the mysterious invisible dark matter — and to uncover the fundamental laws of nature.

The nontechnical talk is free and the public is invited. Refreshments will be available at 3:45 p.m. in the hall outside of the lecture room in Umberger Hall.

Dunkley was a member of the Wilkinson Microwave Anisotropy Probe team that mapped the cosmic microwave background radiation left over from the Big Bang, for which the team received the 2012 Gruber Prize. In addition, Dunkley has won the 2013 Maxwell Medal, 2014 Fowler Prize, 2015 Philip Leverhulme Prize and 2016 Rosalind Franklin Award.

She earned a doctorate in astrophysics from Oxford University and a master's degree in theoretical physics with honors from the University of Cambridge. She was a postdoctoral research fellow at Princeton before joining the Oxford faculty in 2007. She joined the faculty at Princeton in 2016.

Dunkley has appeared on TV several times, including PBS's "Genius by Stephen Hawking" in 2016 and the BBC's "Stargazing Live" and "Science Club" in 2013. She has been interviewed for TV, radio and print by BBC News, BBC World, Sky News and others, and has given major public talks, including the Royal Society's Rosalind Franklin Lecture and at the York Festival of Ideas, both in 2016, and at the European AstroFest in 2015.

The Peterson lecture series, offered through the university's physics department, is supported by an endowment from Chester Peterson Jr. aimed at publicizing and presenting an annual nontechnical public lecture series concerning cosmology or quantum mechanics.