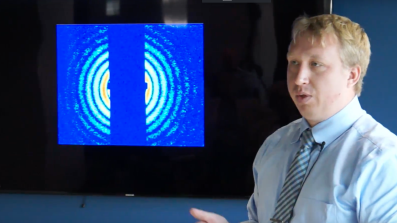 Physics doctoral student Adam Summers was recently invited by Department of Defense (DoD) Director of Basic Research Dr. Robin Staffin to serve as a featured speaker at the inaugural Science, Technology, and Innovation Exchange (STIx) event.  The event was held in Arlington, Virginia, on August 24-25 and showcased the impacts made by extensive science and technology investments, outcomes, and innovations from across the U.S. Defense enterprise. It allowed scientists and researchers to share ideas about DoD-sponsored science and its implications to improving national security.

Adam’s talk “The Extreme Edge of Ultrafast Optical Science” discussed his current work to produce new technology in optical laser science.  He featured examples of how he is measuring the evolution of plasmas formed by exploding nanoparticles and the generation of some of the most intense broadband pulses created in the long wavelength infrared regime.

Summers also discussed how further development of this technology and the science it enables will continue to ensure that the USA retains its role as a global technological leader while also ensuring continued national security.

A recorded version on Summers’ talk, as well as other presentations given during the event, can be viewed at: https://youtu.be/uq6aKO3A60o?t=4684.

Summers is a fourth year PhD student in Physics originally from Kansas City.  He is a 2014 National Defense Science and Engineering Graduate (NDSEG) Fellow sponsored by the Air Force Office of Scientific Research.