Film screening of 'Particle Fever' Thursday, April 23, followed by a Q&A on the discovery and science of the Higgs boson 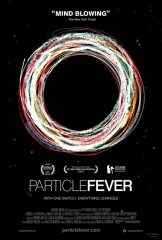 K-State's Department of Physics will host a screening of the documentary 'Particle Fever' at 5 p.m. Thursday April 23, in the Little Theatre at the K-State Student Union. The film will be followed by a question and answer session led by Physics Professor Tim Bolton. The event is free and open to the public.

'Particle Fever' gives audiences a front row seat to our generation's most significant & inspiring scientific breakthrough as it happens. The film follows six brilliant scientists during the launch of the Large Hadron Collider, marking the start-up of the biggest & most expensive experiment in the history of the planet.

10,000 scientists from over 100 countries join forces in pursuit of a single goal: to recreate conditions that existed just moments after the Big Bang & find the Higgs boson, potentially explaining the origin of all matter. But our heroes confront an even bigger challenge: have we reached our limit in understanding why we exist? 'Particle Fever' is a celebration of discovery, revealing the very human stories behind the tale of this epic experiment.

Tim Bolton teaches and performs experimental research in high energy physics with the KSU Physics Department. He was a member of CMS, one of the two scientific teams that discovered the Higgs boson at the CERN Large Hadron Collider.