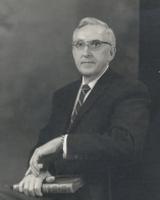 Cardwell Hall is named in honor of Alvin B, Cardwell who was Head of the Department of Physics for most of the period from 1936 to 1967.  Cardwell was born on 16 Oct 1902 in Oral (Roane County) Tennessee.  His undergraduate education was at the University of Chattanooga.  He graduated in 1925 and then moved to the University of Wisconsin where he received an M.S. in 1927 and a Ph. D. in 1930.  He research as a graduate student focused on thermionic and photo emission of electrons from crystalline solids.  Cardwell, then, served on the faculty at Tulane for five years.

In 1936, he joined Kansas State as department head in physics.  In 1944 he took a leave of absence to work on the Manhattan Project in Oak Ridge, Tennessee.  In addition to his Department Head duties during this period, A. B. was the volunteer weather observer for the then new U.S. Weather Bureau.  From 1 April 1939 until his departure in 1944 the official weather station for Manhattan was in Cardwell's backyard at 1928 Humboldt Street.

He returned in 1946, again as Head of the Department.  After World War 2, several young faculty who held the Ph.D. were hired.  These faculty included Dean Bark, Basil Curnutte, Brock Dale, Dean Dragsdorf and Louis Ellsworth, all of whom remained at K-State until their retirements.  The influx of Ph.D. faculty led to the department being authorized to grant graduate degrees in the late 1940s.  First came the Masters degree and later the Ph.D. degree.

From 1952 to 1955 Cardwell served  as Dean of Arts & Sciences.  An illness forced him to give up the position as Dean.  He returned to the Physics Department and resumed the Headship in 1957.

In the 1950s A. B. lobbied to get Physics a building in which it would be the main tenant (at that time, Physics shared Willard Hall with Chemistry).  He oversaw all aspects of the design and construction of the new building that opened in 1963 which, later and fittingly, was named Cardwell Hall in his honor.

In 1956 Cardwell was named as the Distinguished Graduate Faculty member at KSU.  He was the third person to receive this honor.  In 1960 his undergraduate alma mater, now the University of Tennessee at Chattanooga, awarded him an honorary Doctor of Sciences degree.

He continued as Department Head until 1967 and as a faculty member until 1972.  He was always a popular teacher and taught General Physics, primarily for life science students, during his last few years at KSU.

Much of the foundation for the KSU Department of Physics was built during A. B. Cardwell's time as Department Head.

Alvin B. Cardwell, Effects Of A Crystallographic Transformation on the Photoelectric and Thermionic Emission From Cobalt. Proc Natl Acad Sci U S A. 1929 Jul 15;15:544-551

Boris Leaf and A. B. Cardwell, Review of Introduction to Thermodynamics, the Kinetic Theory of Gases, and Statistical Mechanics  by Francis Weston Sears Am. J. Phys. 21, 580 (1953)

R. K. Fry and A. B. Cardwell Photoelectric Properties of Natural Uranium and Changes Occurring at Crystallographic Transformations  Phys. Rev. 125, 471-474 (1962)

Portions of this narrative were taken from an obituary written by James Legg for Physics Today (July 1993).  Dr. Legg also contributed additional information.  Additional resources were "History of Weather Observations: Manhattan KS" and Web sites of the AIP Center for the History of Physics, American Physical Society and American Association of Physics Teachers..

Complied and edited by Dean Zollman.