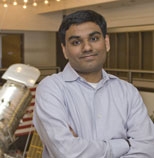 Mapping Dark Energy to 1% (and better)

One of the biggest surprises in modern cosmology was the discovery of the accelerated expansion of the Universe. Explanations for this accelerated expansion range from a new energy component to the Universe (so-called "dark energy") to modifications to General Relativity on cosmological scales. A major effort in observational cosmology today is to map out this expansion history of the Universe. The imprint of sound waves frozen into the matter density - "baryon acoustic oscillations" (BAO) - provide one route to these measurements. I'll review the physics behind the BAO measurements and then discuss recent measurements from the Baryon Oscillation Spectroscopic Survey (BOSS). I'll conclude by looking ahead to future surveys, both from the ground and space.