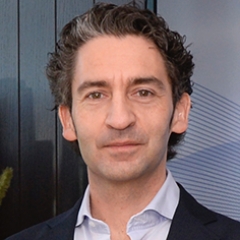 Imaging with a Single Electron and Attosecond Soft-X-rays

Electron recollision in an intense laser field is at the centre of attoscience research and gives rise to a variety of phenomena, ranging from electron diffraction to coherent soft X-ray emission. We have, over the years, developed intense sources of waveform controlled mid-IR light to exploit ponderomotive scaling, quantum diffusion and quasi-static photo emission. I will describe our recent achievements to image a molecule while one of its bonds breaks with sub-Angstrom resolution and report on the generation of isolated attosecond pulses in the soft X-raywater window (284 - 530 eV) and application to soft X-ray absorption spectroscopy in correlated materials.

Jens Biegert received his PhD from the Technical University Munich, Germany, in 2001, and led the research group on ultrafast pulse generation and strong field physics at ETH Zurich from 2001 until 2006. In 2007 he was appointed ICREA Professor of Attoscience and Ultrafast Optics and heads the Attoscience and Ultrafast Optics group at the Institute of Photonic Sciences (ICFO). He has over 130 journal publications, authored 5 book chapters (2 chapters in encyclopedias), given over 120 invited talks and edited one book. He has served on several program and advisory panels and management boards. He serves as editorial board member of the Int. Journal on Atomic Molecular, Condensate & Nano Physics, the Journal Optics, and is associate editor of AIP Photonics. He is fellow of the German National Academic Foundation, was recipient of a Marie Curie Fellowship in 2001, the OSA Allen Price in 2004, was named Research Assistant Professor in the USA in 2001, Fellow of the Optical Society and holds a joint appointment as Research Professor at the University of New Mexico.