Dr. Mustapha Ishak
The University of Texas at Dallas 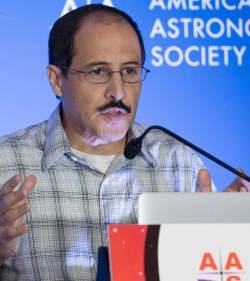 The Acceleration of the Cosmos and Tests of Gravity at Large-Scales in the Universe
102 Cardwell Hall
December 2, 2019
4:30 p.m.

For over two decades, cosmological observations have indicated that the expansion of the universe is accelerating. Einstein's General Relativity predicts the expansion of the universe but cosmic acceleration remains an unresolved and challenging problem for cosmology and all physics. What is the cause of this acceleration? Is it because of a repulsive dark energy or a cosmological constant pervading the universe, or perhaps a modification of Einstein's General Relativity that takes effect at cosmological scales of distance? Or for a completely different reason yet to be discovered? This question also motivated testing gravity physics (General Relativity) at cosmological scales using multiple techniques and approaches. I will review these possibilities and discuss what recent results, including ours, have to say about it.