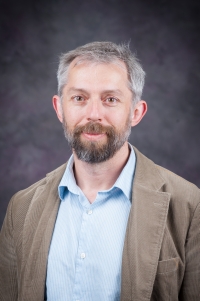 K-State at the Energy Frontier

The Large Hadron Collider (LHC) at the CERN laboratory is the world's most powerful particle accelerator. The start of the proton collider program at the LHC in 2010 brought the dawn of the exploration of a new energy frontier that culminated with the discovery of the Higgs boson in 2012. Although the discovery of this long-sought boson completes the list of particles in the standard model of fundamental particles and interactions, the standard model remains an incomplete low-energy approximation theory that fails to address a number of open questions that include the mechanism of mass stability of the Higgs boson itself, mass hierarchy, and the origin of dark matter. Although we do not yet know the answers to these questions, we can be certain that Higgs boson will play a essential role in finding the answers. The K-State high energy group has been one of the key members in the discovery of the Higgs boson at the LHC and has a strong program that focuses on both studying the Higgs boson and using it as a tool to search for new physics.