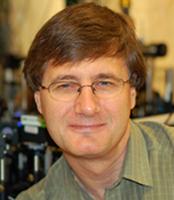 The study of collective light-matter interactions, where the dynamics of an individual scatterer depend on the state of the entire multi-scatterer system, has recently received much attention both in the area of fundamental research and photonic technologies.  Cold atomic vapors represent a particularly exciting system for studying such effects because light-based manipulation of the internal and center-of-mass states of the atoms can lead to reduced instability thresholds and new phenomena. Previous investigations have required single-mode cavities to realize strong light-mediated atom-atom interactions, though, which limit the observable phenomena. Here we demonstrate steady-state, mirrorless superradiance in a cold vapor pumped by a pair of weak optical fields. Beyond a critical pumping strength, the vapor spontaneously transforms into a spatially self-organized state: a density grating forms. Scattering of the pump beams off this grating generates new optical fields that act back on the vapor to synergistically enhance the atomic organization. This system has applications in many-body physics with long-range interactions as well as all-optical and quantum information processing.  I will discuss how non-equilibrium behavior of the gas is a crucial component of our experiments and I will speculate on how our observations might obscure or prevent the observation of recent proposals for quantum phase transitions in this general type of system.

Daniel J. Gauthier is the Robert C. Richardson Professor of Physics at Duke University.  He received the B.S., M.S., and Ph.D. degrees from the University of Rochester, Rochester, NY, in 1982, 1983, and 1989, respectively. His Ph.D. research on "Instabilities and chaos of laser beams propagating through nonlinear optical media" was supervised by Prof. R.W. Boyd and supported in part through a University Research Initiative Fellowship. From 1989 to 1991, he developed the first CW two-photon optical laser as a Post-Doctoral Research Associate under the mentorship of Prof. T. W. Mossberg at the University of Oregon. In 1991, he joined the faculty of Duke University, Durham, NC, as an Assistant Professor of Physics and was named a Young Investigator of the U.S. Army Research Office in 1992 and the National Science Foundation in 1993. He was chair of the Duke Physics Department from 2005 - 2011 and is a founding member of the Duke Fitzpatrick Institute for Photonics. His research interests include: high-rate quantum communication, nonlinear quantum optics, single-photon all-optical switching, applications of slow light in classical and quantum information processing, and synchronization and control of the dynamics of complex networks in complex electronic and optical systems. Prof. Gauthier is a Fellow of the Optical Society of America and the American Physical Society.