Time and Einstein in the 21st Century:  The Coolest Stuff in the Universe 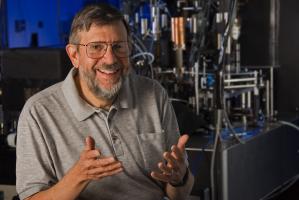 At the beginning of the 20th century Einstein published three revolutionary ideas that changed forever how we view Nature.  At the beginning of the 21st century Einstein's thinking is shaping one of the key scientific and technological wonders of contemporary life:  atomic clocks, the best timekeepers ever made.  Such super-accurate clocks are essential to industry, commerce, and science; they are the heart of the Global Positioning System (GPS), which guides cars, airplanes, and hikers to their destinations. Today, atomic clocks are still being improved, using Einstein's ideas to cool the atoms to incredibly low temperatures. Atomic gases reach temperatures less than a billionth of a degree above Absolute Zero, without solidifying.  Such atoms enable clocks accurate to better than a second in 60 million years as well as both using and testing some of Einstein's strangest predictions.