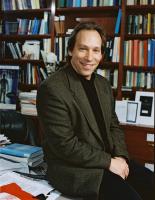 In 1915 Einstein completed his greatest triumph, the General Theory of Relativity. This remarkable theory laid the basis not just for our understanding of the motion of objects within the Universe, but the motion of the universe itself! Yet, in 1916, it looked as if Einstein's theory did not properly account for observations of the universe on large scales.  To resolve this problem, he added an additional term to his equations, the so-called "Cosmological Constant". Within a decade however, observations indicated that such a term was not necessary to obtain agreement with observations, and Einstein called this addition his  "biggest blunder". Over the past decade, new observations have led to a revolution in cosmology.  The standard model of cosmology built up over a 20 year period up until the early 1990's is now dead. Its replacement may be far more bizarre.  In particular, new data from a wide variety of independent cosmological and astrophysical observations, combine together to strongly suggest most of the energy density of the universe today may be contained in empty space! Remarkably, this is exactly what one would expect if Einstein's Cosmological Constant really exists!  If it does, its origin is the biggest mystery in physics. I will close by briefly describing possibile implications for our understanding of nature, for physics, and for life, of this astounding new result.