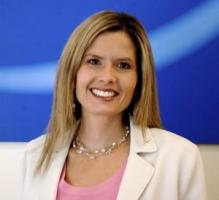 Michelle Munson, CEO of Aspera, Inc. and co-inventor of Aspera's fasp™ transport technology will present the 2013 Ernest Fox Nichols Distinguished Alumni Lecture in Physics on Monday, October 14, at 4:30 p.m. in the Hemisphere Room of Hale Library at Kansas State University. This lecture titled "I was You" is the story of how a K-State Physics and Engineering graduate came to create a technology and start a company that has transformed the world of data transfer. This lecture will not be of a technical level and is geared toward the general public.

In her talk Ms. Munson, a 1996 graduate of KSU in Physics and Electrical Engineering, and co-founder and CEO of Aspera, Inc. (www.asperasoft.com), will detail the story of how she created a new technology and a company that has transformed large data transfer over the Internet. Aspera's technology provides breakthrough high performance data transfer and synchronization regardless of Internet distance, data size, and network conditions. Thanks to industry adoption, the technology has been awarded a 2014 Engineering Emmy for transforming the digital media industry and is used today by over 2,000 companies to transfer large data sets, making Aspera one of the most recognized software startups with over 100X growth since its inception.  Michelle will explain how her Kansas State experience, her lifetime education in science, engineering, and mathematics starting in the Chapman, Kansas, school district, and her life experiences and relationships have all woven together to make this journey possible, and the lessons learned in course.

Michelle was born and raised in Junction City and graduated from Chapman High School. She has dual B.Sc. degrees in Physics and Electrical Engineering from Kansas State University where she was a Goldwater Scholar and later a Fulbright Scholar at Cambridge University where she received a postgraduate Diploma in Computer Science.

Michelle has led Aspera in collaboration with co-founder Serban Simu since its inception in 2004. Prior to founding Aspera, she was a software engineer in research and start-up companies including the IBM Almaden Research center. She was the 2006 KSU College of Engineering Alumni Fellow (the youngest recipient ever), carries multiple patents in high performance transport and bandwidth control, and was named a recipient of a 2014 Engineering Emmy from the Academy of Television Arts and Sciences for the Aspera technology. Michelle is also a frequent speaker on technologies and trends around big data transport, high performance computing in support of science, Cloud infrastructure, and mobile data and has spoken at many conferences in various parts of the world.

She lives in Berkeley, California, with her family including nearly three year old son Aidan and is an active athlete in CrossFit, running, and other activities in the Bay Area and maintains a home in Junction City, Kansas, for visits to the family owned and operated Munson farm.

The lecture is open to the public and is free of charge.  Students, faculty and community members are encouraged to attend to hear about Ms. Munson's education and work. Refreshments will be served prior to the lecture at 4:00 p.m. in the foyer.