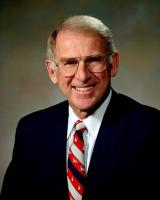 Dr. John Crawford holds a B.A. in Physics/Math from Phillips University and an M.S. and Ph.D. in Physics from Kansas State University.

Dr. Crawford recently retired as Executive Vice President and Deputy Laboratory Director at Sandia National Laboratories where he was responsible for all of Sandia's programs, operations, staff and facilities.

Previously, as Director of Weapon Development, Crawford was responsible for all nuclear weapon system development activities in New Mexico.

Crawford joined Sandia in 1962 and conducted research programs in explosively driven high magnetic field generators and intense pulsed plasma experiments. He was responsible for the design, development and production of electrical and shock-activated sources of neutrons. In addition, specialized neutron sources were developed for medical applications, minerals exploration and nuclear materials detection.

Crawford was recently appointed to serve as a member of a Federal Advisory Committee for the End-to-End Review of the U.S. Nuclear Command and Control System. At present he serves on the Strategic Advisory Group for U.S. Strategic Command.