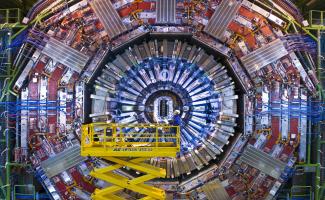 Have you ever wondered what the smallest indivisible particles of matter and energy might be? Particle physicists in K-State's High Energy Physics group use some of the largest scientific instruments on Earth to measure the smallest constituents of matter and energy in the universe. Such elementary particles include quarks, which are the building blocks of the protons and neutrons in atomic nuclei, and neutrinos, which are practically invisible particles emitted by stars and decaying nuclei.

Kansas State University has an active and energetic high energy physics group with a very strong publication and funding record. Our faculty and research members spend significant periods of their research time at Fermilab and CERN, thus enhancing interaction with our US and international colleagues. We are also closely tied with the cosmology group at K-State.