The Identity Project tracks physics students' identities as physicists across the undergraduate curriculum, focusing on the middle years.

As students develop as physicists, they need to develop strong physics and mathematics intuitions, coordinating physics and mathematics ideas learned across the curriculum. The structure of the physics curriculum is deeply cyclic: ''running threads'' of content introduced in the first course are developed and deepened in later courses, often with more elaborate mathematical formalism. Accountable disciplinary knowledge (ADK) is more than just content knowledge: it also encompasses problem solving skills that cut across content areas, and the ways that ''what counts as physics'' vary by setting. To account for changes in ADK, we must investigate growth in both knowledge and skills in multiple settings.

Towards that end, my lab records students in formal and semi-formal physics contexts, tracking individual students as they stream through the curriculum. We look at both lab courses like Modern Physics lab and theory courses like Introduction to Quantum Mechanics. We look for how ADK changes by context and over time, and how students respond to changing expectations.

In addition to research on how students' conceptual and procedural understanding of physics and mathematics develop, I am interested in how students become physicists: how they come to identify with and participate in Professional Communities of Practice in physics, such as research groups and study groups for courses. This topic also includes physicist-like attitudes about the nature of science and inquiry and beliefs about what constitutes ''good physics''. 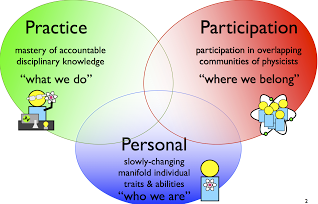 To conceptualize and model identity development, I work on theory building on two different scales. At themacroscopic scale, I model identity as having three integral parts:

At the mesoscopic scale, I look for how to interpret data -- students' actions, behaviors, and discourse -- and connect it to the macroscopic scale. There are three current projects involved here: